These twins have been described as ‘one in a million’ after one of them was born with Down’s syndrome.

Doctors had no idea Harper had the genetic disorder until she was born at Rotherham Hospital, on February 15, around 38 minutes earlier than her sister Quinn. They said ‘sorry’ to parents Nicola, 32, and Todd Bailey but the mum and dad did not see it as a negative and felt there was no need for an apology.
All I really remember is the doctor saying “I’m sorry”,’ said Mrs Bailey, from Sheffield. ‘But as soon as I saw them both my heart just melted. They were both so beautiful.’ Harper had seemed fine during the scans and doctors had not detected she had Down’s syndrome. But despite being surprised by the news Mr and Mrs Bailey said they wouldn’t change either of their twins ‘for the world’.
The proud mum added the twins shared a close bond and they both lit up when they were around each other. But she did admit younger twin Quinn was jealous of Harper. Mrs Bailey, who is a nurse, added: ‘But Quinn has hair envy – she has some blonde fuzz while Harper has a brilliant brown mop which we can now tie in a top knot. ‘Harper found her smile early on and Quinn continues to be the diva of the pair.’ Harper will likely undergo surgery for a hole in her heart when she is around six-years-old. This is common in children with Down’s Syndrome.
Mrs Bailey now wants to educate people about Down’s syndrome and reduce the stigma. She said: ‘Harper is Harper and Quinn is Quinn – they are not the same so I try not to compare them, however hard that may be. ‘You do see people staring at her and it’s hard at times as the perception of Down’s syndrome can be so negative. ‘We get comments like “oh is she a Down’s baby” or “I know a Down’s girl”. She’s not a Down’s baby, she’s a baby with Down’s syndrome. Mr and Mrs Bailey also have a son Lucas, four, who was excited to meet his new sisters. Around 40,000 people in the UK have Down’s syndrome and experts said the chance of having one twin with the condition is one-in-a-million. 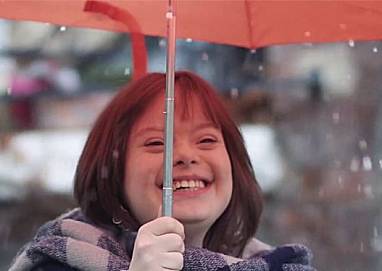 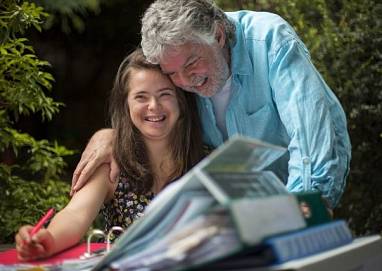 When Sarah was born 26 years ago, my wife Alison and I were in a state of shock.
STORIES

9-year-old Nicholas Moss, from Southampton, had never spoken to anyone until he…
STORIES
MORE
Powered by Stathopoulos/DevArt
© 2014 - 2020 downsyndrome.org.gr