A family from Derbyshire who always knew they wanted to help those in care have adopted nine children with Down’s Syndrome.

Pam and Gerald Patterson first went to social services in the 1980s and made a pact to only adopt children with the condition having volunteered with them before. So they adopted James, now 32, Alice, 28, Molly, 26 and Riley 10 – before Pam’s brother Roger Bull, 65, and wife Leigh, 61, adopted David and Timothy, now 35 and 28, and fostered Marie, four. And the latest addition to the family is six-year-old Isabel and twin three-year-olds George and Thomas, adopted by Roger’s daughter Jenny.
Pam, 60, said: ‘We knew straight away that we would only adopt children with Down’s Syndrome. ‘It was what I’d always wanted to do. Having a family full of children with the condition has made our lives so much richer. ‘It’s challenging, but it’s the route we chose to take. We chose knowing that what we’re taking on, we’re taking on forever.’ Gerald, 62, added: ‘I couldn’t have gone for any other disability. Straight away we loved them all so much.’
The family, who all live within a few miles each other in Swadlincote, say they lives have been made infinitely better for the adoptions. Pam and Gerald were childhood sweethearts and volunteered at the Gateway Club in Birmingham, which caters for children with special needs, in the 1970s. ‘At school I helped at a special school instead of doing sport, which I hated,’ Pam said. ‘It’s so rewarding. You get what you put in. They achieve because you put in the effort.’ Ex-nurse Pam said the adoption had made her life very different to those of her friends, but she wouldn’t change it for the world. ‘If we hadn’t adopted then I would have worked until retirement, it would have taken us down a totally different path,’ she said. ‘When we look at our friends who haven’t got children with special needs our lives are very different, there’s no comparison. ‘It’s what keeps us active because otherwise life would become pottering in the garden or going for a walk but now our lives are consumed with taking them here and taking them there.’
When Riley was first adopted he was oxygen-dependent, had heart problems and was on a lot of drugs – but his progress has been nothing short of miraculous. His heart has been repaired and he’s expected to live well past his teens. Pam added: ‘Emma and Chris don’t know any different, they don’t see James, Alice, Molly and Riley any differently. ‘I am pretty sure that as far as they are concerned they have only made their lives richer.’ And former police officer Gerald says: ‘They’re just people – they enjoy the same things as you and I. ‘It’s given us a completely new lease of life, we do things now that we’d never have done.’ 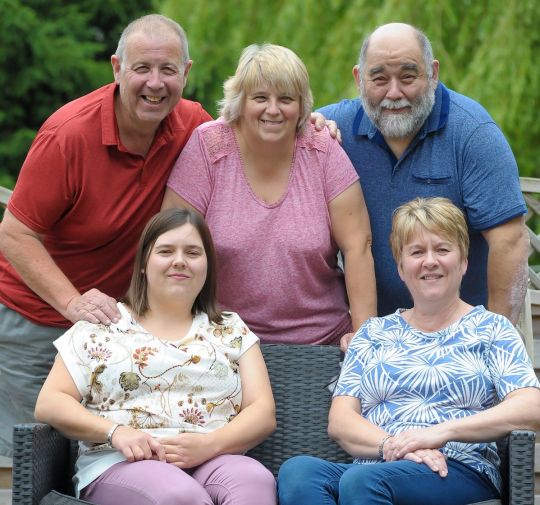 A 20-year-old man with Down syndrome was carrying a toy gun when he was shot dead by…
NEWS
MORE
Powered by Stathopoulos/DevArt
© 2014 - 2020 downsyndrome.org.gr