Shéri Brynard was born with an extra chromosome and a fighting spirit. Having Down Syndrome classified Brynard as intellectually disabled, and not many people expected her to go far.

“People told my mother not to worry because we don’t live long,” Brynard says.

Harsh words, intended as consolation. But her parents paid no attention to them. Today, Brynard is 36 years old and not just defying, but exceeding expectations.
“Life and death are not in our hands, but what we do with our lives,” she says. Brynard was determined to study further after high school and enrolled at Motheo College in Bloemfontein. She became the only person in the world with Down Syndrome to qualify with a tertiary teacher’s diploma without any concessions being made for her.

Brynard also conducted her coursework in English, even though it was not her mother tongue. Her goal was to be able to communicate in a language that would allow her to spread her message of positivity as far as possible.

Now a teacher at Lettie Fouche School, Brynard is inspiring children just like her. The motivational speaker has also given over 600 public speeches around the world, addressed the United Nations in Geneva, and appeared on local radio and television on multiple occasions.
Brynard’s efforts to change perceptions of people with disabilities has been widely recognised. She received The President’s Award, the World Down Syndrome Day Award, as well as the Shoprite Checkers South African Woman of the Year Award. “I was the first person with a disability to win this competition,” Brynard says. Her experiences have been documented in her autobiography, Shéri: Just the Way I Am. “I could not believe it when I saw my book on the shelves,” Brynard says.

This is just one of many in her list of achievements. While Brynard is often recognised for what she’s done in the face of her disability, she doesn’t feel the need for comparisons. “Success is measured against oneself,” she says. Every day is an opportunity for Brynard to be better than the person she was the day before. And with her attitude, it’s possible. “You cannot always change your circumstances,” Brynard says. “But you can change the way you look at them.” 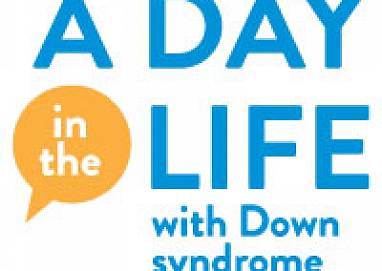 9-year-old Nicholas Moss, from Southampton, had never spoken to anyone until he…
STORIES
MORE
Powered by Stathopoulos/DevArt
© 2014 - 2020 downsyndrome.org.gr